All the Broken Places

John Boyne's latest release is getting a lot of hype and a lot of hate. All the Broken Places (Pamela Dorman Books, 2002 (US edition)) is the sequel to The Boy in the Striped Pyjamas (David Fickling Books, 2006). I don't recall any book that has incited so much ire from my library colleagues, so let's look at that big elephant first. Written "as a fable," it is the story of Bruno, the son of a Nazi official at Auschwitz, and the totally unlikely and impossible friendship he develops with Shmuel, a boy of similar age who is interred in the death camp. Longing for companionship, Bruno crawls under the barb-wire fence and joins Shmuel, both of them ultimately dying in the gas chamber. The book has sold eleven million copies worldwide, yes 11,000,000 copies, and has been adapted for cinema, theatre, ballet and opera.

Critics have skewered this book because it is unrealistic, paints Bruno's death as a bigger tragedy than Shmuel's, and distorts the horror of Auschwitz. Rabbi Benjamin Blech, a noted Talmud professor at Yeshiva University, wrote an article on Aish.com that called the book "well-meaning, " but also quoted a Holocaust survivor, who begged the rabbi to "tell everyone that this book is not just a lie and not just a fairytale, but a profanation."

Super Jewish kidlit librarian Heidi Rabinowitz gave her views on Lisa Hedger's podcast "Everyone Loved It But Me." She finds the book extremely offensive because the book does not work as a fable -- there is no moral to teach, it attempts to humanize Nazis, and Bruno is impossibly naive.

I do not hate this book as much as everyone else does. By now it is too famous to not know the plot and the ending, but when I first read it in 2006, I noted Boyne's skill in drawing the reader in and building tension. I read a lot of Holocaust literature, and I thought that the literary quality of the book would encourage readers to further explore the topic. And even if I did not like it, or found issue with it, it could always be used as an example and a teaching moment by pointing out the inaccuracies and the improbability of the story.

I was reminded of Chimamanda Ngozi Adichie's TED Talk, "The Danger of a Single Story." She notes "how impressionable and vulnerable we are in the face of a story, particularly as children." The main takeaway from her talk is that "The single story creates stereotypes, and the problem with stereotypes is not that they are untrue, but that they are incomplete." I would apply this to The Boy in the Striped Pyjamas. This is definitely not the one book to read to learn about the Holocaust. But, quite frankly, neither is The Diary of Anne Frank. 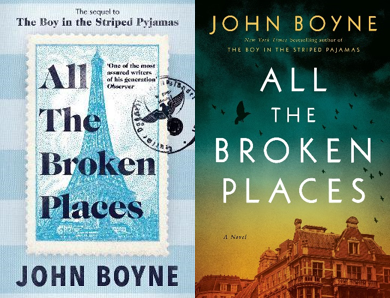 Would I have picked up All the Broken Places if it was not promoted as the sequel to The Boy in the Striped Pyjamas? Probably not. I never wondered what became of Bruno's sister, but I was intrigued by the hype. It is interesting how the cover of the UK version mimics its predecessor, while the US version does not. There is something about a sequel -- knowing the characters and their history brings you right into the action of the book. The title is taken from a conversation about Europe after the war: "They're still rebuilding...after all that unpleasantness...". Gretel "felt if I might laugh out loud. It was an extraordinary way to refer to six years of war, countless millions of deaths and all the broken places that had been left behind."Without giving too much away, All the Broken Places is meant for adults. It is about Bruno's sister, Gretel, and is told in alternating chapters. Gretel is now in her nineties and living in the posh Mayfair neighborhood of London. But every other chapter recalls her back story. She leaves Germany as a teenager. She and her mother are living in Paris three years after Bruno's death -- six months after her father is hanged for war crimes. Her mother has become an alcoholic, and Gretel feels a pervading guilt throughout her life. Her guilt haunts her for the rest of her life, and, as the reader will learn, there are reasons for the guilt.

I enjoyed the book. There is no question of John Boyne's skill as an author. You can tick off all the appeal points: well-developed, nuanced characters, strong sense of place in every location, great pacing and tone. There is humor, anger, sadness -- the whole gamut of emotion.

In his author's note, Boyne describes the book as "a novel about guilt, complicity, and grief." He also notes

Writing about the Holocaust is a fraught business and any novelist approaching it takes on an enormous burden of responsibility. Not the burden of education, which is the task of non-fiction, but the burden of exploring emotional truths and authentic human experiences while remembering that the story of every person who died in the Holocaust is one that is worth telling.

For all the mistakes in her life, for all her complicity in evil, and for all her regrets, I believe that Gretel's story is also worth telling.

It is up to the reader to decide whether it is worth reading.

Email ThisBlogThis!Share to TwitterShare to FacebookShare to Pinterest
Labels: Boys in the Striped Pyjamas, Everyone Loved It But Me, Heidi Rabinowitz, John Boyne, Rabbi Benjamin Blech