The Book of Books

"With extraordinary exhibitions and one of the world's finest collections of Ancient Near Eastern art and archaeology, the Bible Lands Museum Jerusalem is dedicated to encouraging the understanding and appreciation of the roots of monotheism through its exhibitions, catalogs and programs." 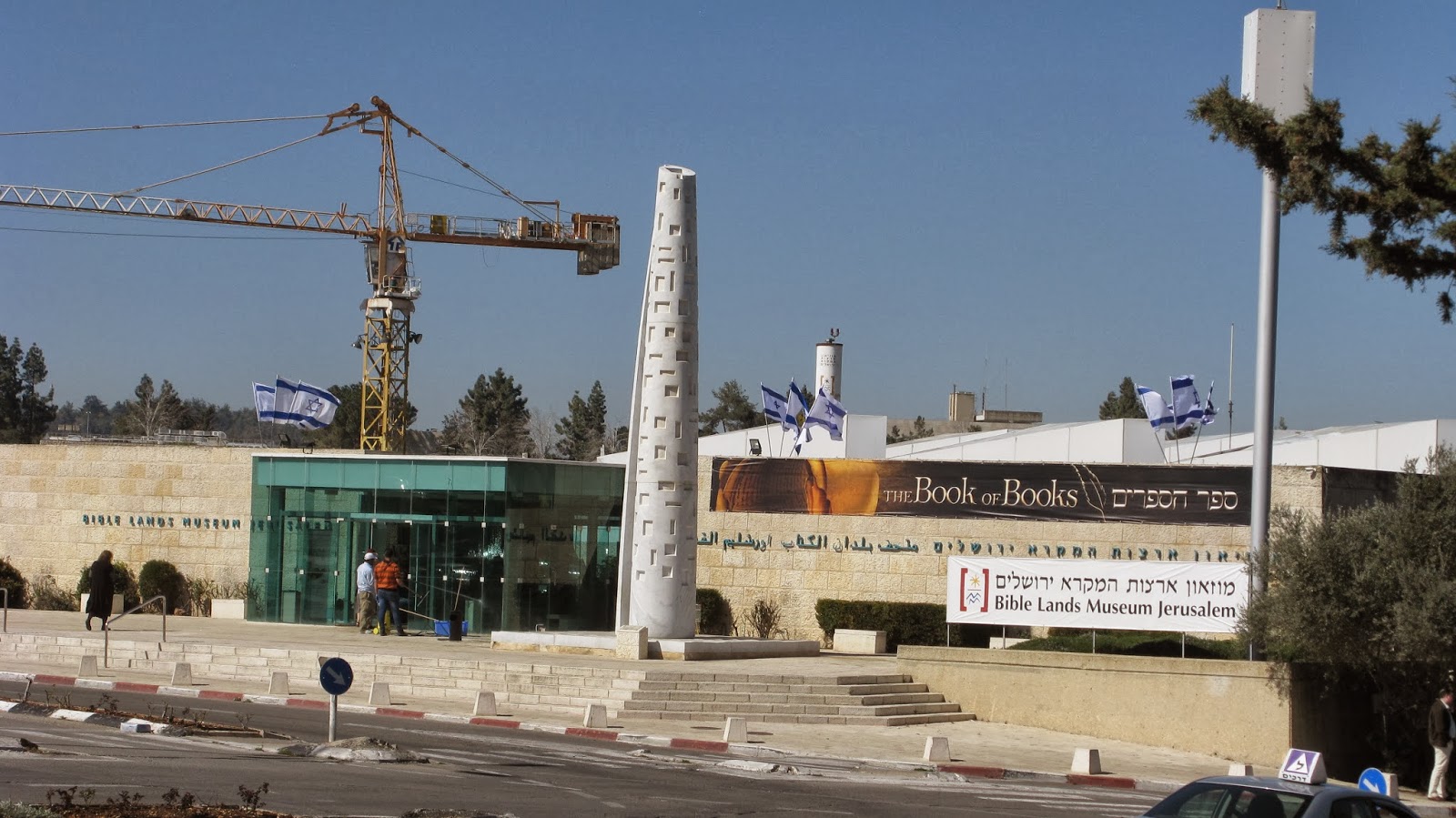 I went to see a new exhibition at the museum:  The Book of Books, which is being shown in cooperation with Verbum Domini, "a network of international exhibitions that celebrate history’s most influential book—the Bible. Each exhibit features a unique assemblage of Roman Catholic, Orthodox, Protestant, and Jewish treasures, displayed against immersive backgrounds, to tell the story of the Judeo-Christian Scriptures throughout the ages.
The Verbum Domini exhibition series was inspired by Pope Benedict XVI’s vision of renewed religious passion for the “Word of the Lord.” The first Verbum Domini exhibit was held at the Vatican in the spring of 2012. Since then, exhibitions focusing on different aspects of the Bible’s extensive history have been held around the world, from Cuba to Israel and beyond.
Verbum Domini exhibits feature items from The Green Collection—one of the world’s largest private collections of rare biblical texts and artifacts—as well as significant pieces from the collections of major public institutions and other private collections worldwide."

I was mainly interested in the Jewish treasures, which included: 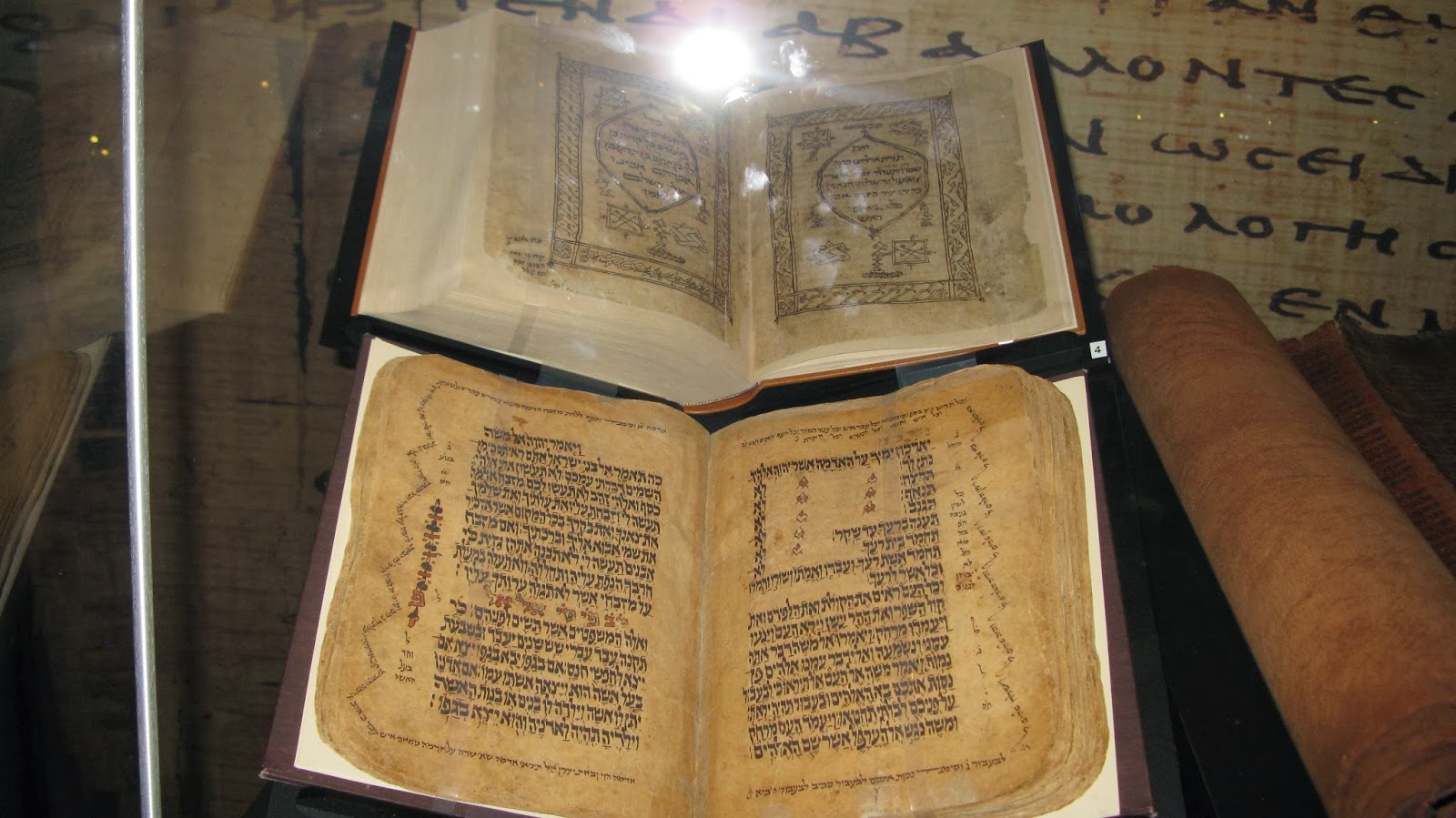 Some books from Yemen produced in the 15th and 16th century.  These are handwritten, ink on paper renditions of the Pentateuch.

Incantation bowls from 5th century to 8th century Iraq.  These are often referred to as "magic bowls," because a circular formula was written in Aramaic which was thought to drive away evil spirits.  One is inscribed with the words of Isiah 22:8:  "And he discovered the covering of Yehudah, and you did look in that day to the armor of the house of the forest." 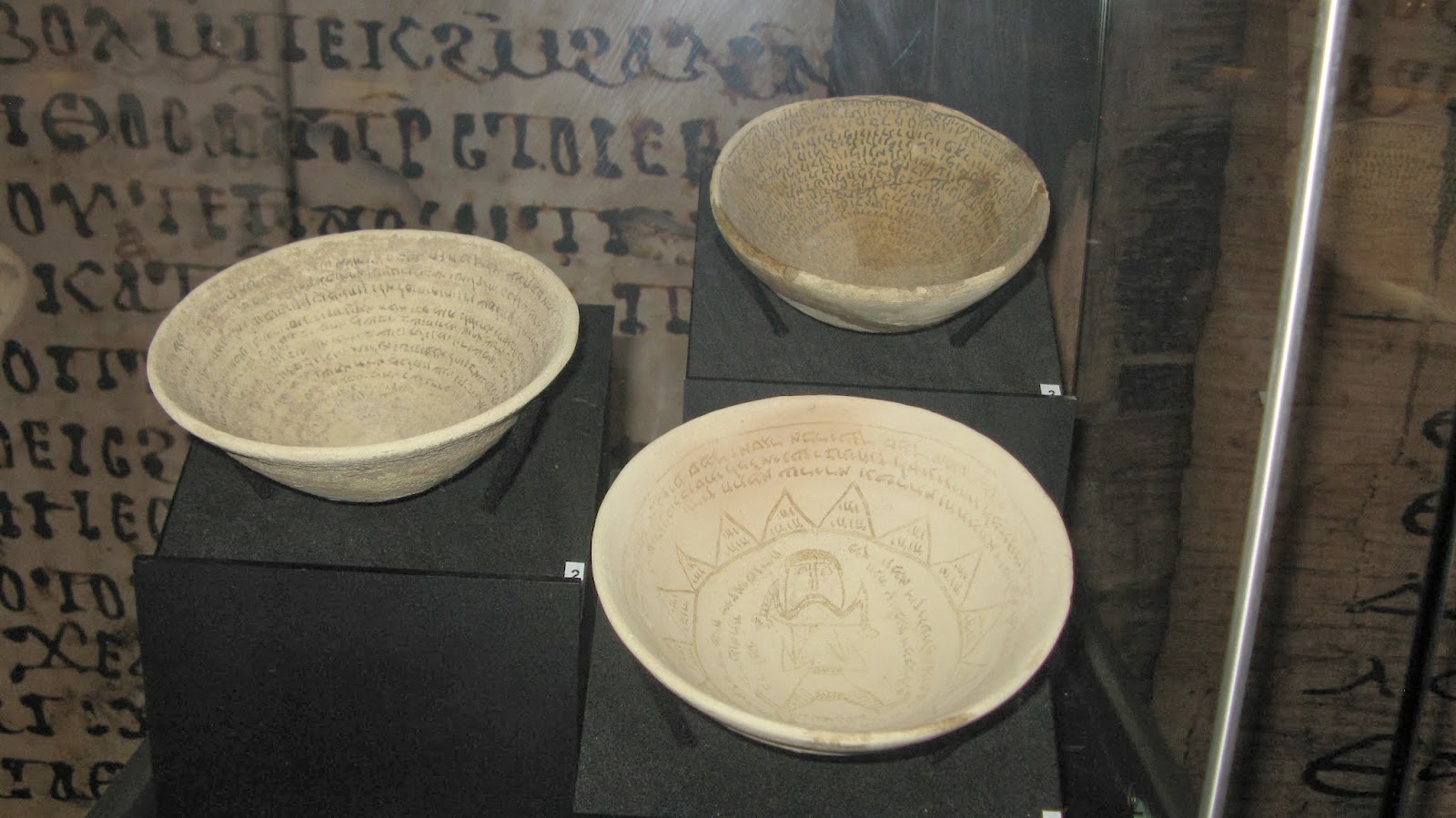 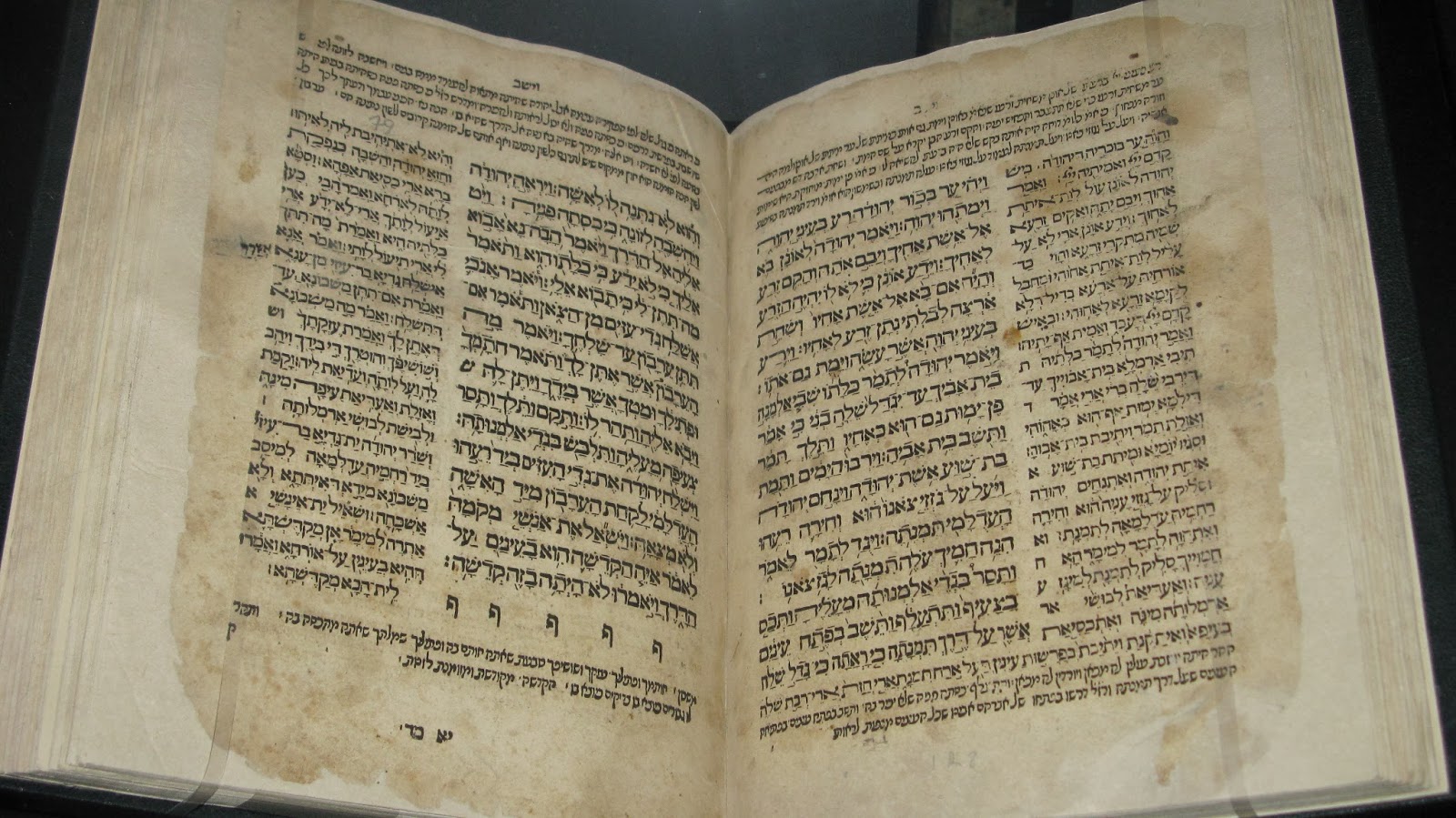 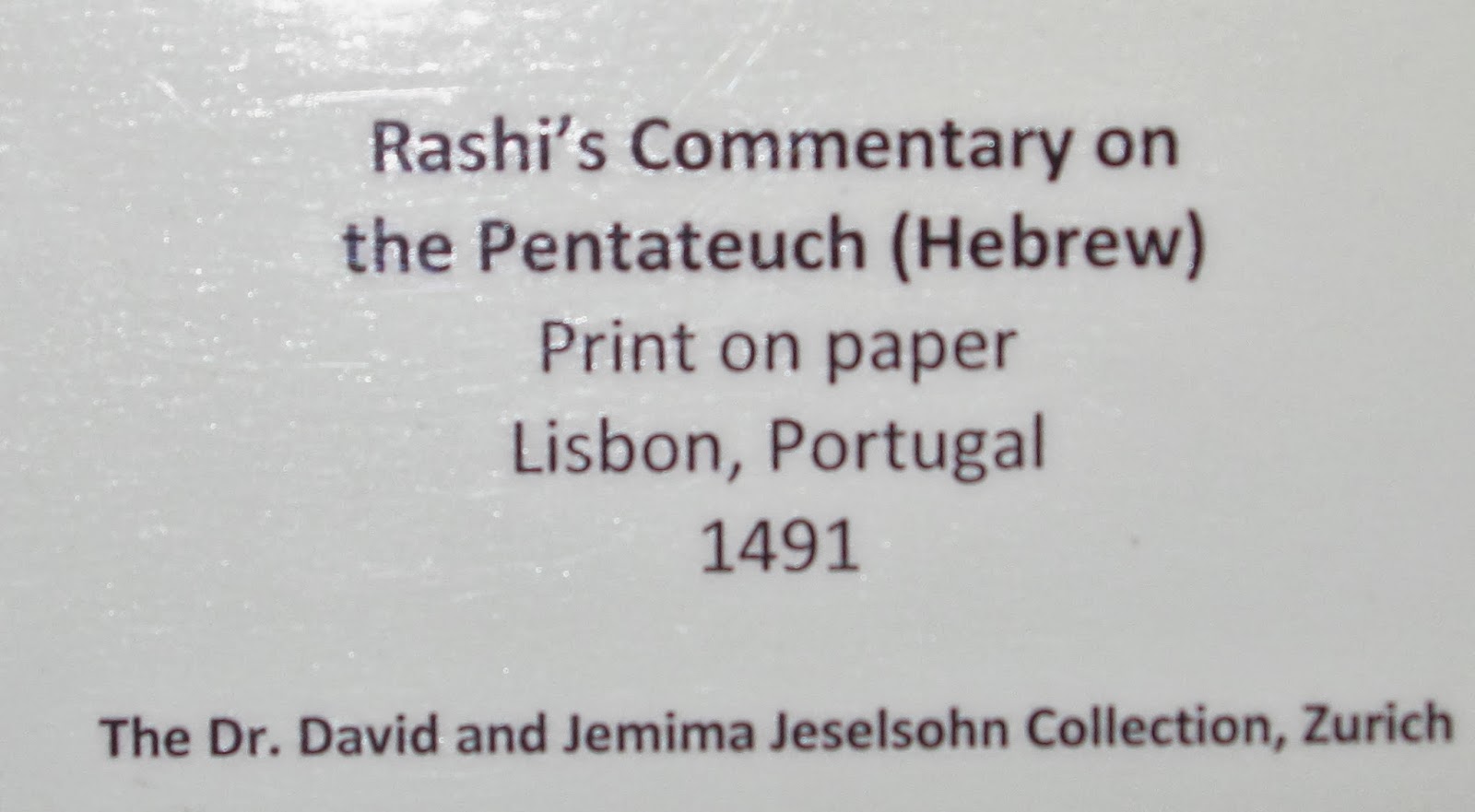 With Purim just around the corner, these Megillot caught my eye.  The first is an illuminated scroll from Ferrara, Italy from about 1615.  The second is from 19th century Morocco.  It's ink on parchment, and the silver work on the case probably took almost as much attention to detail as the scroll. 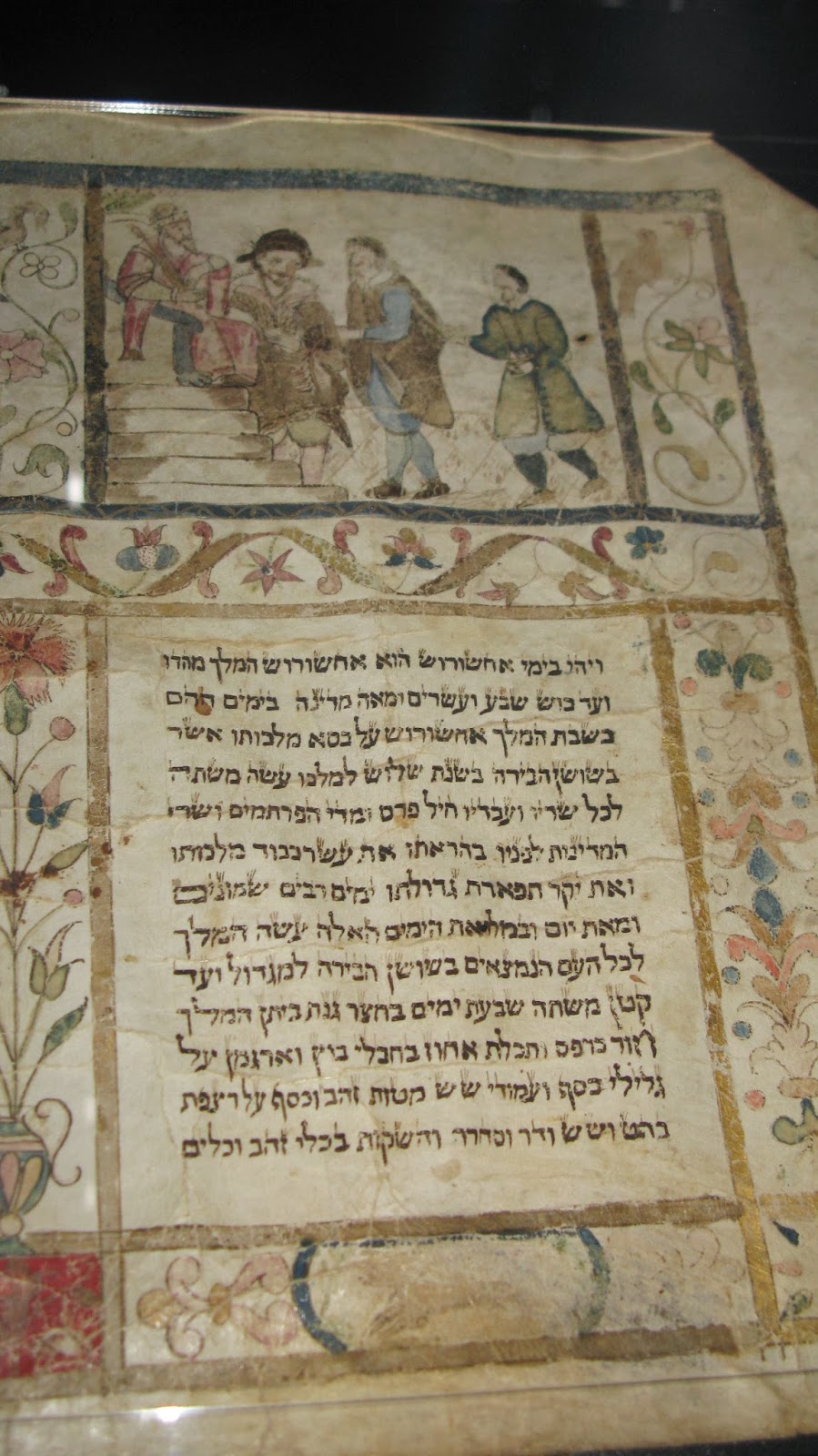 The exhibit also include fragments from the Cairo Geniza and original pages from the Gutenberg Bible, as well as many examples of the New Testament and illuminated Gospels.

The rest of the museum is home to collections of Etruscan, Greek and Roman artifacts, as well as Egyptian and Babylonian relics.

A Rabbi, a Friend and the Benefit of the Doubt

It would seem my recent reading falls into these categories:

Make yourself a teacher (aseh lecha rav)
Former President William Clinton made Rabbi Genack his rabbi.  He asserts that although he is a Southern Baptist, "[Rabbi Genack] has been a trusted guide on matters of leadership, justice and faith." Rabbi Genack, a Talmudic scholar, chief executive officer of the Orthodox Union's Kashruth Division and a congregational rabbi, met Clinton when the former President began his campaign for the White House.  "As their friendship deepened, the rabbi started sending Clinton brief essays highlighting spiritual insights from the Bible.  Later, at Clinton's request, [Rabbi] Genack took a more formal approach, also inviting many distinguished acquaintances to contribute."  These include Rabbi Lord Jonathan Sacks, former Chief Rabbi of the United Hebrew Congregations of the Commonwealth; Noa Rothman, Yitzchak Rabin's granddaughter; and noted American rabbis and Jewish scholars.

The result is Letters to President Clinton: Biblical Lessons on Faith and Leadership by Menachem Genack and Bill Clinton (Sterling Ethos, 2013). It was a finalist in the Anthologies and Collections category of the 2013 National Jewish Book Awards.

Okay, not my favorite book.  Maybe it's because I was a Republican, and there is quite a bit of Bush-bashing. There's also plenty of political rigmarole, like "it is ironic that President Clinton is often assaulted by his Republican critics for waffling and changing policy, when his ability to adjust to new circumstances and political reality, while remaining true to his basic vision is the mark of real leadership." Maybe it's because I don't relate to explaining things from a Jewish perspective to a Baptist.  There are some bright spots:  Rabbi Sacks' letter about "Influence or Power?" was insightful; Jeremy Dauber's discussion of cities was relevant to Clinton's move to New York. But more than that I think of the people involved with the Clintons who suffered mysterious deaths:  Vince Foster, Mary Mahoney, James McDougal, Ron Brown, etc. When I read about Queen Esther facing Achashveros, "an innocent girl, ripped from the bosom of her family, unschooled in the art of diplomacy, and unacquainted with the intrigues of a royal court," all I could think of was Monica Lewinsky, the blue dress, and the leader of the free world saying "I did have a relationship with Miss Lewinsky that was not appropriate."

I thought this would be a good read for someone moving to a new area, and I was right.  The author had 52 "dates" in which she tried to find a good, local friend with whom to get together spontaneously.  She did some research by reading books about friendship, and she set herself rules about how she would meet people.  Bersche lives in Chicago, so she had her pick of a lot of restaurants, social events, etc.  Although not religious, she joined a group for young Jewish leaders.  She also took a cooking class and an improv class at Second City.  Bertsche even used "friend services" in her research.

So what have I done on my friend quest?  I've joined a book club, I meet a friend for coffee once a month, and I go to a weekly prayer group.  Still on the list:  an exercise class, organizing a craft group, and volunteering at the library.  I've tried to stay in touch with the people in my Ulpan class, and I am blessed with amazing neighbors who are also very convenient friends.

"dan l'chaf zchus" sometimes translates to "give the benefit of the doubt."

There are a few books in this category that are on my reading list:
The Other Side of the Story:  Giving People the Benefit of the Doubt -- Stories and Strategies by Yehudis Samet (Artscroll, 1996)

Also by Yehudis Samet - It Wasn't How It Seemed:  True stories about People Who Jumped to Conclusions (Shaar Press, 2001)

and Benefit of the Doubt:  Breaking the Idol of Certainty by Gregory A. Boyd (Baker Books, 2013), in which this Christian pastor "invites readers to embrace a faith that doesn't strive for certainty, but rather for commitment in the midst of uncertainty. Boyd rejects the idea that a person's faith is as strong as it is certain. In fact, he makes the case that doubt can enhance faith and that seeking certainty is harming many in today's church."

But I've also giving the benefit of the doubt to several books that would not normally be on my reading list.

The aforementioned book club has chosen A Soldier of the Great War by Mark Helprin.  My copy is 860 pages long.  It's about an old man walking on the road with a young factory worker.  As they walk, the man tells the story of his life.  Instead of being off put by the number of pages, the subject matter, or the "My Dinner with Andre"-like, one long conversation about life format, I decided to give the book a chance, and I'm really enjoying it. 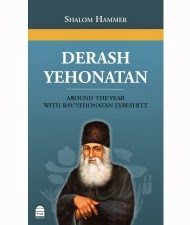 Koren recently published Derash Yehonatan: Around the Year with Rav Yehonatan Eybeshitz by Shalom Hammer.  Ravi Yehonatan died in 1764, and Rabbi Hammer has endeavored to "popularize the teachings of Rav Yehonatan and make them accessible to a broader audience."  He chose selections that he felt were the most pertinent and poignant.  This Rabbi lived in what is now Denmark, had a disagreement with another rabbi that divided the Jewish community and lived in the 1700s.  I asked myself if there might be anything in the book that was pertinent and poignant to me.  I was pleasantly surprised to find writings about Jewish activism and "the requirement of every Jew to long to be in the Land of Israel."  Rabbi Hammer notes that "those who cannot actualize Aliya should at least anticipate the day when they can join Am Yisrael in their land.  Those fortunate enough to live in the land should appreciate the opportunity given them."  My roommate from my freshman year in college was visiting on her most recent trip of many to Israel.  It was great to see her, someone who loves Israel and shows it through frequent visits and support, and to appreciate how far we've both come since our freshman year in college, when making Aliya was a small hope, and I am now fortunate to live in this beautiful country. 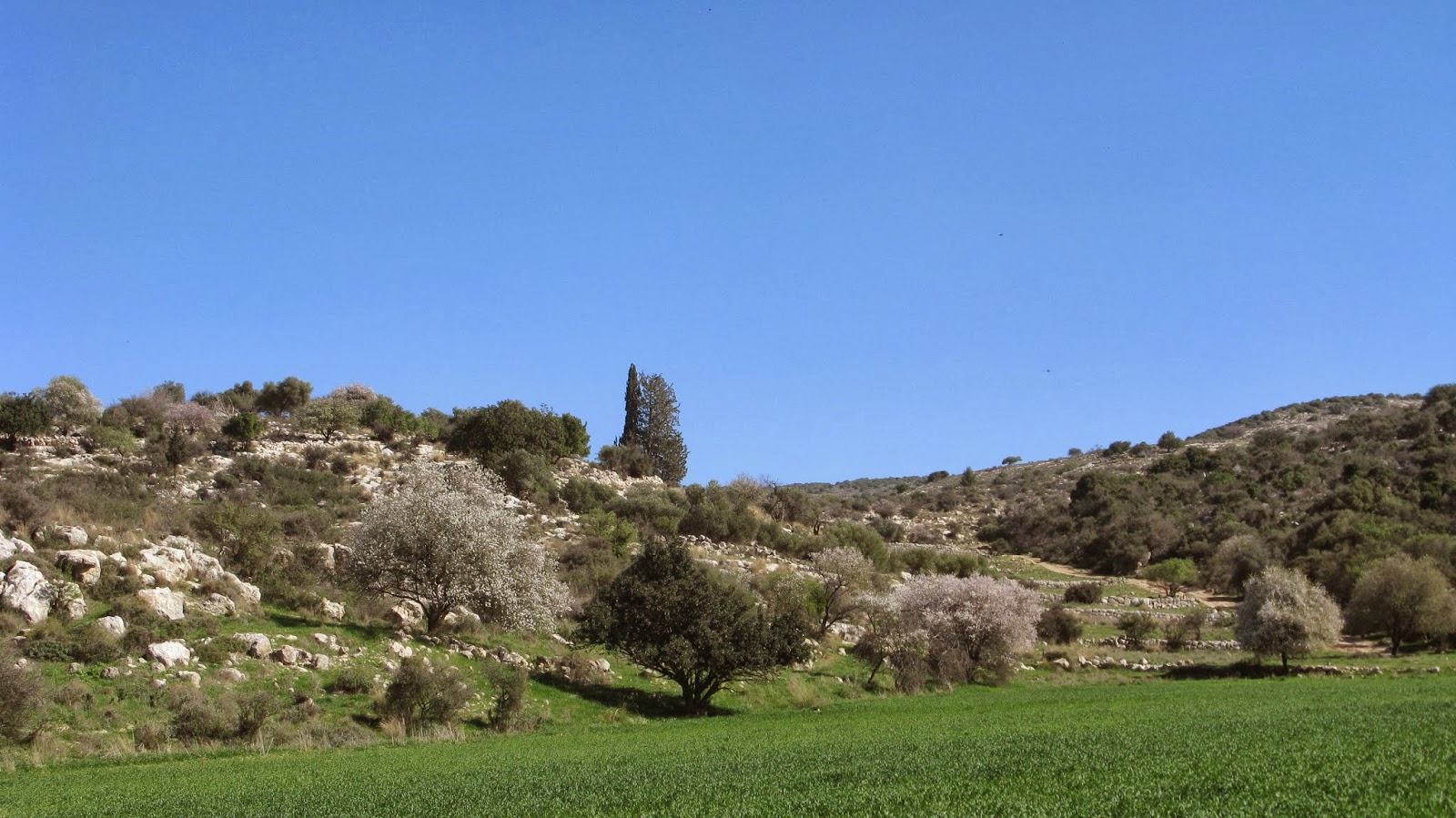