Many people who have made Aliyah realize that while they were hoping to be fluent in two languages, they end up illiterate in both. My family has decided that a good way to maintain our English skills and build our Hebrew skills it to read a book in English, then read the same book in Hebrew. In theory this should work well. Since you already know the plot of the story, you have some context for reading. You know you already enjoyed it in English, so you're likely to enjoy it again, and the challenge of reading in Hebrew will be worthwhile. It's also interesting to compare the Hebrew and the English:

With Harry Potter and the Prisoner of Azkaban, the title and author are spelled phonetically in Hebrew. He is also riding Buckbeak the hippogriff on the cover -- same as the English version. But Muggles as known as "Mooglim" and The Daily Prophet is "Navi HaYomi. "Toldot Hakishuf," which translates to "Annals of Magic" is required at Hogwarts.

The Hunger Games translates pretty well: it would literally be "The Games of the Famine" from the Hebrew. The second book in the series is title "Hitlachot," which means conflagration, inflammation or ignition.  Pretty close to Catching Fire. The final book in the trilogy is Mockingjay. We would have thought it would be translated phonetically, but the Hebrew title is "Orvanei Chakeen," or "Mixed-up Mimic," which is a good description of the titular birds.

Another favorite trilogy, the Divergent series by Veronica Roth, gets similar treatment. The Hebrew title for the series and first book is "Mefutzalim," which means divided or fissured. Divergent in Hebrew is either "mesutaafim," which is more like a tree branching out; or "metupalgim,"which means to split. Neither captures the idea of the novel. Looking up the words has increased our vocabulary as well as given us an appreciation for the nuances of the Hebrew language.

Then there is Letters to Talia by Dov Indig (Gefen 2012). The book is a collection of letters exchanged between Talia, a secular kibbutz girl, and Dov, who was combining military service and Torah study through a hesder program. The book is not only helping with language development as we read in Hebrew and English, it is also helping us to understand the divisions between secular and religious society in Israel, which is also an important part of our klita (absorption).

No beautiful sights to share -- we are now experiencing a horrible winter storm with massive downpours and snow expected in mountainous areas.

But we did manage to see some real cats of Israel before the deluge. 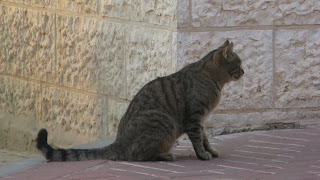 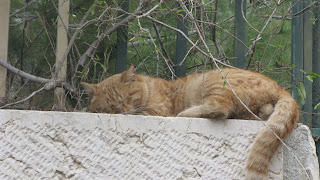