The main reason my interest in the history of pre-State Israel is so fascinating is because I can visit the places where history happened. Two recent books highlight two of the people involved in this history.

Laura S, Schor's The Best School in Jerusalem: Annie Landau's School for Girls, 1900-1960 (Brandeis University Press, 2013) chronicles the history of the school as well as the history of the State. Annie Landau moved from London to Jerusalem in 1899 to teach English at a girls' school. The school was started in 1864 by Moses Montefiore, and named the Evelina de Rothschild school when it was endowed by her husband in her memory. With Annie's strong personality and leadership skills, she soon became of the head of the school. During her tenure the number of students increased significantly, the fields of study expanded to meet the needs of the students and the community, and the school really did become know as the best school in Jerusalem. The school's history was entwined with Israel's history, as Evelina welcomed new immigrants, saw its graduates working in British Mandate offices, and continued providing instruction under challenging conditions in the War of Independence. The school is now in the Rechavia neighborhood of Jerusalem, but it was once on the corner of HaNevi'im and Shivtei Yisrael, located in Frutiger House, the home of a Swiss banker who went bankrupt. 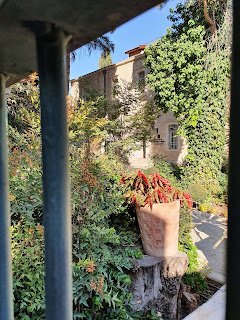 Daniel S. Chertoff's father, Mordecai S. Chertoff, went to Palestine in 1947 and became a correspondent for the Palestine Post (now the Jerusalem Post). He corresponded with his family about his work and about what was going on: the danger, the elation of November 29th when the United Nations voted for partition, and the loss of friends to Arab violence. Daniel's book, Palestine Posts: An Eyewitness Account of the Birth of Israel: Based on the Letters of Mordecai S. Chertoff (Toby Press, 2019), is both historical and personal. The letters describe the convoys trying to break through the siege of Jerusalem, as well as Mordecai's love life. Mordecai gives an account of how the Israelis broke the blockade at Bab el Wad.

Bab el Wad saw fierce battles during the War of Independence (1947-1948). In Arabic, it means "Gate of the Valley," and now it is called Sha'ar HaGai ("Gate of the Valley" in Hebrew). The trip from Tel Aviv to Jerusalem (that now takes less than an hour with no traffic) used to take three days. The Ottomans upgraded the road in 1867, which reduced the time of the trip to two days. The Ottomans built an inn in 1869, which was the only place along the road where travelers could stop for the night. The inn had some famous visitors, including Franz Joseph I of Austria-Hungary, King Edward VII of England, and German emperor Wilhelm II. Abed Kouttainay's family lived in the Khan and ran the inn. He remembers serving British soldiers beer in this video.

Israeli soldiers fought long and hard to gain control of Bab el Wad. They took positions in the surroundings mountains, and held their posts for six days under heavy fire. It is now a National Memorial Site run by the Israel Nature and Parks Authority. Since it is a ten-minute drive from where I live, I went to take the tour. Films of eyewitness accounts dominate the presentation, but there are several artifacts inside and several vintage vehicles outside. I was thinking they will be bringing a lot of school tours, and as I was leaving, there was a big group of high school students. After watching all the films and walking around, the place that I pass on the highway has taken on new meaning. 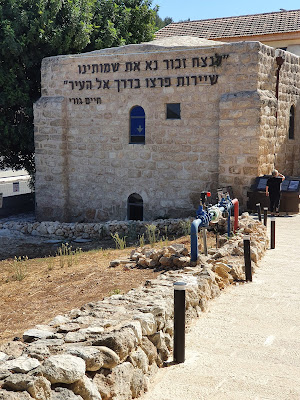 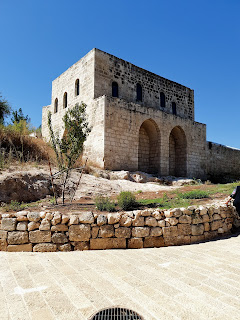 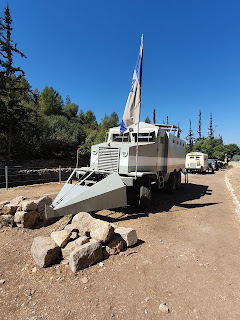 I hoped to see some Real Cats of Israel wandering around, but there must have been hiding. Our friend Noga has grown quite a bit since we last saw her: 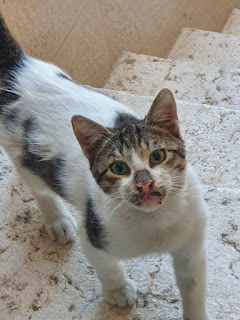