Between the Dire Straits - Bein HaMetzarim

The three week period between the 17th of Tammuz and the 9th of Av is known as "Bein HaMetzarim" - between the dire straits, and it is the saddest period in the Jewish calendar. The custom is not to hold weddings, not to play or listen to live music, and not to cut hair or shave (as a sign of mourning). Because it is considered a time of misfortune, many avoid dangerous situations, such as travel or surgery. But, as always in Judaism, it is also a time to reflect and learn. So when we are between the "dire straits," we read a lot of Holocaust-related material:

Catherine Ehrlich writes about her grandparents' harrowing experiences in Austria before, during and after the Anschluss in Irma's Passport: One Woman, Two World Wars, and a Legacy of Courage (She Writes Press, 2021). Irma, Ehrlich's grandmother, was one of the rare women who attended university in the early 20th century. She and her first husband planned to go to England and study literature, but World War I started, and he was killed in combat. Heartbroken, Irma went to Vienna to teach. She encountered Jacob Ehrlich, whom she had known in their native Bohemia (Czech Republic). They married and had a son, Paul. Soon after, the Nazis arrived and made life miserable for the Jews. Catherine never knew her grandfather. As an active leader of the Jewish community, he was arrested and taken to Dachau, where he died. Irma was able to use her knowledge of languages and connections to escape to London with her son. She spoke to Jewish groups about the urgent need to save the Jews trapped in Nazi-occupied areas. After the World War II, she and Paul moved to the United States, where she eventually worked filing persecution claims for Holocaust survivors.

Irma literally lived history, and much of the book is about historical events. It is also interesting how many nationalist stirrings and Antisemitism there was even before World War I. Irma was a survivor, and her granddaughter combines Irma's account of her life, the historical events, and her own memories of this formidable lady to show that Irma refused to think of herself as a victim.

Subtitled "A Story of Resilience," A Child Without a Shadow (self-published, 2021) is the story of Shaul Harel. His family left Warsaw in 1932 for Brussels, where he was born Charles-David Hilsberg in 1937. When the Nazis invaded, he and his sister were separated from their parents and hidden with non-Jews. After World War II, he was sent to an orphanage, then a school, and immigrated to Israel when he was twelve. He served in the Israeli army, went to medical school, and became a renowned pediatric neurologist. This book contains a lot of reflection. Did Shaul's time as a hidden child, where his life was devoid of love, mental stimulation and fresh air, spur him to his achievements and his caring way with child patients? Another fascinating and inspiring story of someone who lived history.

The Forgotten Memoirs (by Esther Farbstein; Mesorah, 2011) may have the wrong title because the stories are unforgettable. Its subtitle, "Moving Personal Accounts from Rabbis Who Survived the Holocaust," gives the reader an idea of the content. Farbstein did extensive research and found that many rabbis published learned books after World War II, and in the introduction to the book or in an afterword, they described their experiences during the Holocaust. These introductions are the text of the book. Each story is unique, but there are some similarities: the rabbis' circuitous journeys through Europe to escape the Nazis, their concerns for their constituencies, and their adherence to Torah Judaism no matter the danger or challenge. It's a thick volume, but it is probably better to take breaks between each rabbi's account.

The Vanishing (Library Tales Publishing, 2022) by David Michael Slater is billed as "an unforgettable journey of redemption and revenge. The story starts when Sophie Siegel is eleven years old, and the situation for Jews in Germany is deteriorating quickly. As she hides from Nazis in a closet, she realizes she is invisible. Her primary goal is to keep her younger neighbor, Giddy, safe and alive. But as she moves from her village to the ghetto to a concentration camp, she learns that there are no rules, and no justice. Full of action and full of graphic detail of Nazi atrocities, the reader will root for Sophie and Giddy.
Hopefully, this will be the last time we read Holocaust books during the Three Weeks because they will be transformed into days of joy!
As for the Real Cats of Israel, we've had quite a parade of feral cats, including Noga: 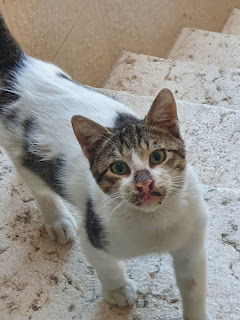 Meaningful reading!
Posted by KSP at 3:47 AM

Email ThisBlogThis!Share to TwitterShare to FacebookShare to Pinterest
Labels: A Child Without a Shadow, Irma's Passport, Real Cats of Israel, The Forgotten Memoirs, The Vanishing