What was I expecting when I attended an event advertised as "Etgar Keret and Maira Kalman -- artist, author, and illustrator at The New Yorker will share with Professor Evan Fallenberg stories of their journey through Israel in the footsteps of Mark Twain in an endless search for places, people, and things with music by Jane Bordeaux?" I was hoping for a discussion of art and literature and some insight into the creative process.  I got that and more. 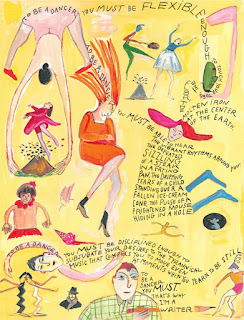 I am a HUGE fan of Kalman's work, both in children's books and in The New Yorker.  Her style of whimsy with a certain intelligence makes me laugh and think at the same time. Keret is a master storyteller, whose work has been translated into 17 languages. Kalman was born in Israel and moved to the United States when she was four. Keret is a child of Polish Holocaust survivors and has lived in Israel all his life. They have collaborated with each other and with other authors and artists to creative an impressive mix of interesting and multi-faceted projects. Kalman is in Israel as the artist in residence at Mishkenot Sha’ananim as part of the Rothschild Foundation’s Marie Residency program, a tribute to the life of Italian artist and glass sculptor Marie Brandolini, who died in 2013 at age 51.The program – in the spirit of Brandolini’s love and appreciation for literature – brings accomplished writers to both Venice and Jerusalem, two special cities in the deceased artist’s life. 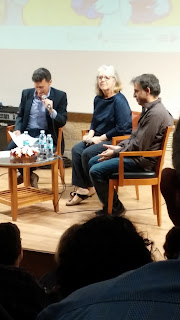 Keret and Kalman talked about current and future projects that include museum exhibitions, operas and movies.  As far as Twain's Innocents Abroad, the pair brought their own irreverence as they talked about their fascination with minuscule and trivial things that created vivid moments including buying two envelopes; going to the Arava, looking through a telescope and seeing Saturn's rings and moons; and visiting a bookstore that specializes in Romanian books. Right now Kalman is working on a recipe book of cakes, so that is a big topic of discussion.

For his part, Fallenberg asked questions about creativity, celebrity and artistic obsession. I loved that coffee is a part of Kalman's artistic rituals, and that Keret likes his fame and often finds it useful. As far as obsession, Keret seems to write a lot of stories about the father-son relationship, and Kalman admits to being obsessed with time. 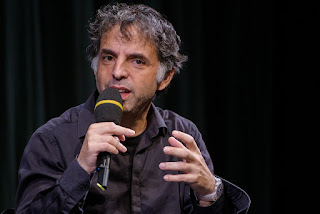 Keret spoke a lot about his older sister and brother, to whom he introduced
Kalman. At the end of the program, I was able to ask him personally what I've been dying to know: how did he get the name "Etgar," which means "challenge" in Hebrew, and did his siblings have equally unique names? No, his brother is named Nimrod, and Etgar got his name because his mother had an emergency C-section in her sixth month of pregnancy with him, and the situation was very precarious for a while. He beat his first challenge (probably his biggest), and has been taking on challenges since then.

The surprise of the evening was Jane Bordeaux, which is a trio of musicians: Doron Talmon - vocals and percussion; Amir Zeevi - guitar and vocals; and Mati Gilad - double bass and vocals. I enjoyed their folksy sound and the clever lyrics.  In what translates to "How is it possible not to:" 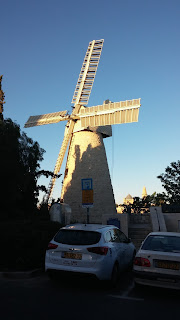 Besides my evening at Mishkenot Sha'ananim, which is right near the windmill, I made a stop at a historic house. My colleagues enjoyed The Language of Angels (Charlesbridge, 2017); me not so much, but that is a different discussion. The book tells the story of the modernization of the Hebrew language, a massive project undertaken by Eliezer ben Yehuda. The family lived at 11 Ethiopia Street, across from the Ethiopian Church. The street is extremely narrow, but the houses are magnificent. The neighborhood borders on the ultra-Orthodox neighborhoods of Geula and Meah She'arim, but this block is a rather quiet corner of the world, with all the residences (except ben Yehuda's house) situated behind heavy metal security gates. It appears that no one is living in the house, which could definitely use a little renovation. 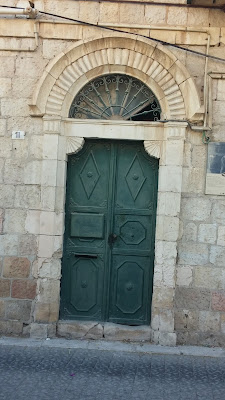 And what is a trip to Jerusalem without seeing one of the Real Cats of Israel, this one just rolling with the punches: 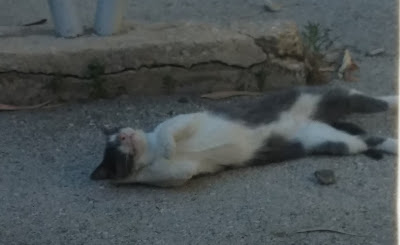