A Catalog of Librarians

They say "birds of a feather flock together," whether it be a host of sparrows, a chattering of starlings, a murder of crows or a pandemonium of parrots.

What do you call it when there is more than one librarian? Some have suggested a shush, a volume, a stack or an answer, but I liked a catalog better. So why did I need to know what a group of librarians is called?

Because I was very excited to meet a former librarian. She managed a very small collection, and a recent Sydney Taylor Book Award winner is based on her story.  Yes, people, I met

THE LIBRARIAN OF AUSCHWITZ 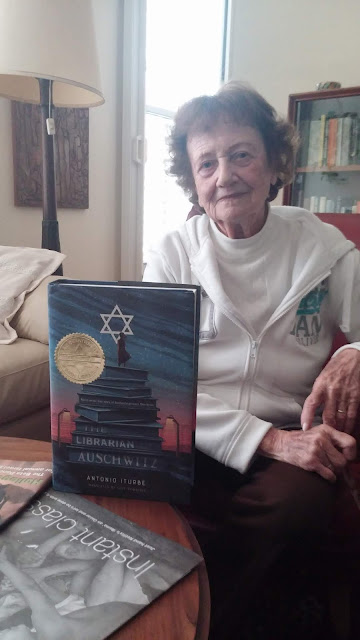 Dita Kraus lives in Israel, and I was thrilled that when I contacted her, she graciously allowed me to visit. I don't think I had a lot of expectations about meeting her, but I had a lot of questions, most of which were answered by, "it is a work of fiction based on my experiences." But her experiences were amazing. If you haven't read the book, Dita did not even know she was Jewish until the Nazis invaded Czechoslovakia. Her family was deported to Terezin, where she was in the chorus of the opera Brundibar. She took painting lessons with Friedl Dicker-Brandeis. 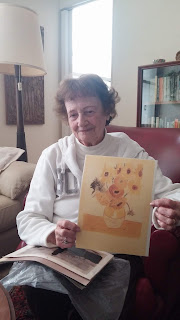 From Terezin, her family was deported to Auschwitz, where they were assigned to the family camp in Birkenau. It was there, as a fourteen-year-old, that Dita was assigned to be an assistant in the children's "school," and given the responsibility of taking care of "the library."  She would keep track of who "checked out" books and she would hide the books at the end of the day. She did not know what I imagined a library in Auschwitz would look like, so she shared the picture below that she drew: 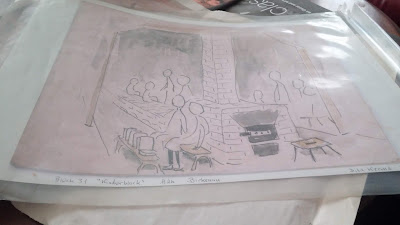 After the Holocaust, Dita returned to Czechoslovakia. She also reconnected with Ota Kraus. He was one of the counselors in the children's camp, but Dita and he did not really interact because he was much older than she. They married and moved to Israel in 1949. In the book, there is a beautiful speech by Fredy Hirsch about making aliyah. Since she and her husband had known Hirsch, I asked about his impact on their decision to move to Israel. Dita told me that her husband was a Zionist, and it was his decision to move. They taught English at a boarding school for 29 years and had two sons.

Ota (Otto) died in 2000. He published several novels: Land Without God, Mountain Wind, Tel Kotzim, and The Dream Merchant and Other Galilean Stories. I picked up a copy of The Painted Wall, Ota Kraus' "literary adaptation" of events that happened during the war. In his book, Dita is known as "Dasha," and "shepherds" H.G. Wells' A Short History of the World, Elemental Geometry for High Schools, a French novel, a Russian grammar, an outdated atlas, and "three quarters of a 19th century Czech village novel."
Dita speaks Hebrew, English, Czech and German. She is still quite active -- visiting Prague twice every year, speaking to classes about her experiences, maintaining correspondence and selling her late husband's books. She has recently written her own memoir (in Czech), and she continues to paint. I picked up a print with two of my favorite flowers -- sunflowers and anemones (calaniot). 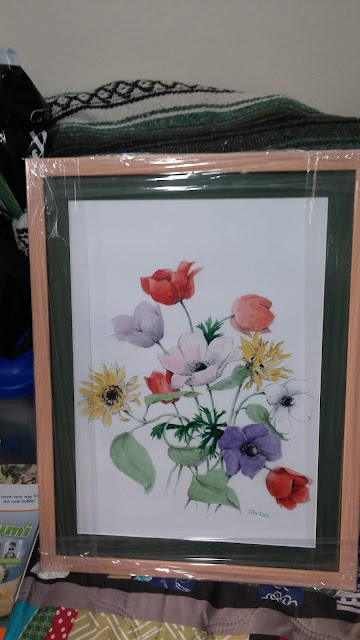 So, on the one hand, it was such an honor and pleasure to meet Dita. I don't think she understood how emotional it was for me, especially after reading about her and learning about her life story. On the other hand, I think I learned an important lesson about romanticizing the Holocaust. Dita was happy to talk about her painting and the locations of the camps, she did not talk about any of the horrors. While her children were exposed to the Holocaust because most of the Kraus' social circle were survivors, they only talked about people and places, never details about the atrocities.

No Real Cats, but something equally great - after I visited with Dita, I drove a little farther up the highway and bought some cheese and freshly picked strawberries - the completion of a great day. 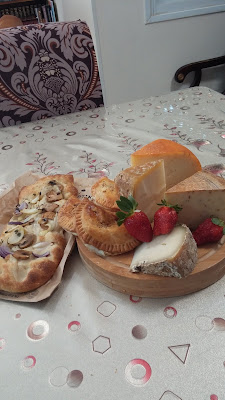