There are times, and they become more frequent as the years go by, that I look at the world with quite a cynical eye and lament that I am becoming old and bitter.

Then, I read a book like Dreams Never Dreamed (Toby Press, 2020), and know that no one can read this book and remain a cynic. Its subtitle is "A Mother's Promise that Transformed Her Son's Breakthrough into a Beacon of Hope," and it is written by the father, Kalman Samuels.

I first became familiar with Shalva, the Israeli Association for the Care and Inclusion of Persons with Disabilities because of the Shalva Band. A music therapist formed a band made up of "persons with disabilities," and the group almost made it to the finals of Eurovision.

And while Shalva Band sang about "A Million Dreams," Shalva itself started with a promise and a dream. Kalman and Malki Samuel's son Yossi was a healthy baby until he received a faulty DPT vaccine. His situation deteriorated until he was both deaf and blind. The Samuels moved from Israel to New York to find Yossi the resources he needed, and then back to Israel. Malki Samuels made a pact with God: "If You ever decide to help my Yossi, I will dedicate my life to helping so many other mothers of children with disabilities whom I know are crying with me for their children."

Yossi was later known as "the Heller Keller of Israel," as he learned to sign, read braille, and recognize the make and model of a car by its door handle. It was now time to make good on the pact, and Malki wanted to "create a center that will provide parents and families with what we never had -- a program that will care for their challenged children after school each day, giving the child therapy and a good time, and giving the family a chance to live a normal life."

Shalva started in an apartment in the Samuels' neighborhood, and eventually needed a bigger facility. Kalman Samuels did the the fundraising for the organization, travelling to meet donors and promote Shalva. Soon the demand for Shalva's services was so great, that it was time for a new facility.

With dedication to purpose and infinite patience and fortitude (the bureaucracy in Israel is mind boggling, and there were multiple lawsuits and injunctions against the proposed building), a gorgeous, huge facility was built with attention to every detail. It houses facilities for all kinds of therapies, a pool, a respite floor so children can stay over and parents can have a break, a library, a cafe that is open to the public, an employment workshop, and an emergency shelter for those with disabilities. The building is filled with color and art.

As and for Yossi? He met President George W. Bush, visited the Volvo factory in Sweden, and rode an elephant in Thailand. "He is blind, deaf, and cannot walk, but he never loses his zest for life, never ceases to dream new dreams and to make them happen."

As is often the case, fact is as unbelievable as fiction, and the book chronicles the story of an amazing family with incredible determination.  The Samuels have seven children, and they are all involved in Shalva (youngest child Sara plays guitar in the Shalva band). You will find yourself routing for Yossi and for Shalva throughout the book, and you will marvel at how so many dreams were realized.

As for the Real Cats of Israel, who knows what they are dreaming? 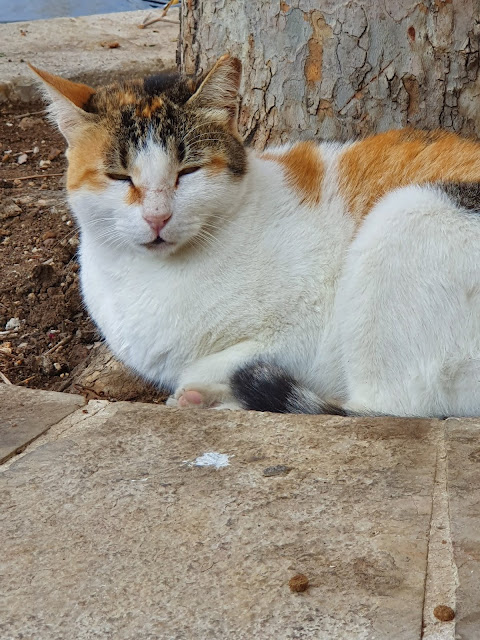