A Crack in the Earth

In 2004, Haim Watzman traveled from Eilat to the Upper Galilee. His account, A Crack in the Earth: A Journey Up Israel's Rift Valley, was published in hardcover in 2007 (Farrar Straus Giroux) and in paperback in 2012 (Argo-Navis). The book is presented in three parts. The first describes the landscape of Southern Israel, and the geologic events that produced different rock formations, elevations and drops, and left fossils and other evidence of incredible activity over millions of years. Much like in Geology class, the different time periods and definitions (a graben is a valley with a distinct escarpment on each side caused by the displacement of a block of land downward (an escarpment is an area of the Earth where elevation changes suddenly, formed by either erosion of faulting)), went above my head, but the areas he talks about are amazing -- some say they could film the Star Wars movies in these desolate expanses.

In Part Two, Watzman describes the area from the Dead Sea to Sha'ar HaGolan, just below the Kinneret. Driving up Route 90, his passes sites from ancient history (Masada, Qumran, Qasr al-Yahud) and more modern history (Beit HaArava). He passes small communities (Naama, population 165; Gitit, population 504; Hamra, population 173) until he comes to Tirat Tzvi (population 901) in the Beit She'an valley. This kibbutz was founded in 1937 and named after Tzvi Hirsch Kalischer, one of the fathers of the Zionist movement. The kibbutz has a meat processing plant, fish ponds, and is the largest date-palm grower in Israel.

Part Three is more personal, as Watzman revisits places in the Galilee he first encountered when he arrived in Israel, then 25 years prior:
A land becomes mythical in three ways. When it is distant in place or time, we imagine how it would be if we were there. If it is the land we live in, we attach to the places around us our stories about who we are, where we came from, and where we are going. And if we lived there once, we inscribe in it stories of the tribulations and exhilarations of our younger half-forgotten selves. (page 137)

Watzman's "tour" of the Galilee includes the grave of Rachel the Poetess, the Bedouin village of Tuba, Kfar HaNasi, Rosh Pina, and Hatzor HaGlilit. He also visited several archaeological site, including Kherbet Shura, the site of a ancient synagogue; the ruins of a 12th century Crusade fortress, Jacob's Ford, the site of one of Saladin's victories over the Crusaders in 1179, and the "Daughters of Jacob" bridge over the Jordan River, where there is evidence of human habitation from 750,000 years ago.

Despite the restrictions because of COVID-19, through reading A Crack in the Earth, we were able to take a tour and read about the history and beauty of the Land of Israel.
As for The Real Cats of Israel, they are happy in the backyard: 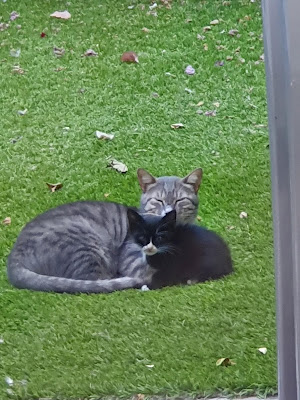 Email ThisBlogThis!Share to TwitterShare to FacebookShare to Pinterest
Labels: A Crack in the Earth, geology, Haim Watzman, Israel, Real Cats of Israel