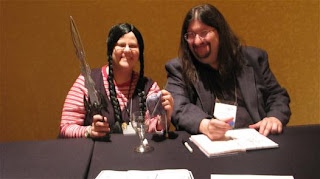 Hereville: How Mirka Got Her Sword is the 2011 Sydney Taylor Book Award Winner for Older Readers. Barry Deutsch’s graphic novel is the first book in this genre to win the award. What is it about? “Yet Another Troll-Fighting 11-Year-Old Orthodox Jewish Girl. “ Mirka Hirschberg is constantly bombarded with other people’s expectations. Her stepmother, Fruma, insists that she learn how to knit. Her sisters chide her that she will never learn to be a wife and mother. But Mirka has big dreams: she wants to fight dragons. I will not spoil the ending of this great story, but let’s just say Mirka has become one of my role models. I’ve commented before about how much I love this book and how it is an example of “Toras Imecha”—the influence a mother has on her household in both obvious and subtle ways. So while Mirka was learning how to knit, she was also learning other valuable skills.
As an Orthodox Jewish woman, I’ve been presented with role models like the Biblical matriarchs and prophetesses. Every Friday night the “woman of valor” is praised for her qualities, most of which relate to her husband, family, and running the household. And we are constantly reminded to adhere to the attribute of tzinus – modesty in dress, speech, and action. “But the king’s daughter is all glorious within” (Psalm 45, verse 14) is the constant refrain, encouraging Jewish girls and women to look within, both themselves and their households to find fulfillment.
Without giving a dvar Torah, I find the concept of temimus more compelling. This is drawn from a shiur entitled “Aishes Chayil” that was given by Rav Moshe Weinberger, Morah D’Asrah of Congregation Aish Kodesh in Woodmere, New York. He talks about Sarah Imeinu, the matriarch of the Jewish people, who is known for the quality of temimus. It can be defined as wholeness, perfection, completeness, innocence, being unblemished, but Rav Weinberger draws out that Sarah had conquered the struggle of Jewish women: to be able to be in the world at large and never lose the connection to her inner self. This, too, is Mirka’s struggle. While those around her encourage her to be quiet, to master domestic skills, to stay inside and knit, she wants to go out and conquer the world. So while in the “real world,” it is unlikely an Orthodox girl would want a sword, in the world of graphic novels, it translates to struggles and metaphors on many levels.

I had attended the New York Comic Con in October of 2010. I had thought I was a pretty big nerd, until I went there. So many people were dressed as their favorite characters, and the fans of comic books, graphic novels and science fiction are hard core.

I decided Mirka would be the perfect costume for Purim, although my family does not like me to leave the house in costume. I had a black jumper, and I was able to get a black braided wig online. I picked up my sword at Dollar Tree.
When the Association of Jewish Libraries convention rolled around in June, and I heard Barry Deutsch would be presenting, I thought it was time for Mirka to make her appearance. The one thing missing was that I did not know how to knit. In this endeavor, I had a “Mirka-esque” victory. I am left-handed. Growing up, my mother could not figure out how to switch hands, nor did she have the patience to teach me. I figured I would never learn. Then I saw some knitting books in the craft store. I tried to teach myself left-handed knitting, but it didn’t work. I was determined. I found another book, which had a tip for left-handed knitters: the needles and stitching are going to be awkward at first anyway, so just learn how to knit right-handed (Did Mirka write these instructions?). So, I started, and with a little help from super-librarian and expert knitter Sherry Wasserman, I was able to start a scarf and keep going.
What was it like to be Mirka? I was a little nervous. I walked into Barry Deutsch’s session, and I sat next to Barbara Krasner, who had graciously saved me a seat. After I sat down, the lady on the other side of me got up and starting taking pictures. I wondered why she was doing this, because I had no idea who she was. I later met a friend. She told me she was in the back of the room and did not recognize me. She thought I was Barry Deutsch’s sister because of the black hair and the fact that I was sitting next to his MOTHER. So, I’m kind of glad Mrs. Deutsch took my picture. I later sat next to Barry as he was signing autographs, and it was really fun.
Later that night at the awards banquet, I was seated next to Barry and his mom. I walked in late, and they were wondering whether I would be me or Mirka. If I knew I was going to be sitting with them, I might have come as Mirka.
The feedback from my colleagues was positive (I guess those with negative feedback kept it to themselves). They saw a different side of me. Even one who did not like the book thought it was a great idea and is hoping for more cosplay at the AJL convention, possibly a session or meal where everyone dresses as their favorite character from a Jewish book (Tanach included!).

While Mirka knits, she dreams of a sword. While I do the laundry, I dream of the bigdei Kahuna. While I cook for Shabbat, I invoke “L’chvod Shabbos Kodesh (in honor of the holy Sabbath)” to give the food an extra special taste. When I am kind to strangers, I’m hoping I’ve met Elijah the Prophet, who heralds the coming of the Messiah. And when I knit, I think of Mirka. I wish every girl in Bais Yaacov could read this book. It's not about being an Orthodox girl. It's about an Orthodox girl who is brave, who balances family life and traditions with her personal aspirations, and who dreams big.

So I am grateful to Barry Deutsch and Mirka for showing me that an orthodox girl can be smart, funny, resourceful, a good knitter, and a troll fighter!
Posted by KSP at 2:55 PM