An Author Groupie in Israel

This is a story about an author groupie, the incredibly small world of Jewish geography, and the joys of living in Israel, which came together in interesting ways in the week before and during Passover.

I am an author groupie. I love meeting authors, especially authors of books that I love. I have the utmost respect for someone who can craft a book that captures my attention and my imagination. I often save quotes or a turn of phrase that says something perfectly and succinctly. When I attended Book Expo, I would wait on lines for hours to meet some of my favorites. Attending the Baker & Taylor preview meetings was also a great way to meet authors and hear about how they write and what inspires them. It’s hard to believe that at a small venue in Central Jersey, I met Laura Amy Schlitz (Good Masters! Sweet Ladies!), Tony DiTerlizzi (Spiderwick Chronicles, Search for Wondla), and Katherine Paterson (Bridge to Terebithia). One of the coolest authors I’ve encountered is Shannon Hale (Goose Girl), who was willing to sign a book to my daughter with the sentiment “to my dear, close, personal friend.” Not all my meetings have been as awe-inspiring as these. I’ve been yelled at by authors who thought they should have won the Sydney Taylor Book Award, and there have been a few that were aloof, but most are very appreciative of their fans.

Recently I met three creative people and learned about their work.

It’s a Small World
I had the joy of attending the wedding of an amazing young lady that I’ve known for all of her life. It was very emotional and very satisfying to see her looking so beautiful and so happy. Seated at my table was… an author!

Sheryl Prenzlau is the author of The Jewish Children’s Bible (Pitspopany Press) and some of the books in the Kid Sisters Series (Targum Press), both of which were familiar titles. Her most recently published book is Room for One More: A Modern-Day Fairy Tale (Feldheim, 2013). Sheryl lives in Jerusalem, and she also works as a Cognitive Behavioral Therapist. She graciously took time from her busy schedule to answer some questions.

She actually wrote the book over 20 years ago, but other projects took priority. When it came time for the pictures, her editor at Feldheim suggested an illustrator, Adi Katz, and Sheryl was able to work closely with him, making suggestions for colors as well as particulars in the illustrations. Sheryl’s children and grandchildren also had input into the details of the story. The result is a funny and eye-catching rhyming version of the "crowded house" story with many surprises.

The Gemara (Sukkah 28a) tells of Jonatan ben Uzziel, one of the 80 tannaim who studied under Hillel the Elder. It was said that while he was absorbed in studying Torah, if a bird flew over his head, it would be burnt. L’havdil, when Rebbetzin Shira Smiles is teaching Torah, I think if a bird flew over her head, it might also ignite. Rebbetzin Smiles lectures all over the world; teaches in a seminary, gives audio and video classes, and is the author of three volumes of Torah Tapestries, based on her studies and lectures. Being a big fan of books about the weekly Torah reading, I asked to review Breishis and Shmos for the AJL Newsletter. As I’ve mentioned in my reviews, I can almost hear her voice when I read the essays. I love her style of posing several questions and answering them by illuminating the cogent points in the parsha. It has become my habit to read from her books on Friday night. She also happens to live down the block from me in Ramat Bet Shemesh.

When I saw her buying vegetables for Passover, I was taken aback. Someone of her brilliance actually does mundane activities like shopping and cooking for Passover? Since we started reading the book of Vayika, what would I do on Friday night without a book? I asked when her new book would be out, and she said “Thursday.” I sent my son to pick up a copy, which Rebbetzin Smiles autographed. As you will read in my review in the AJL Newsletter, it’s easy to find relevant lessons in stories about the patriarchs or matriarchs or in the Ten Commandments. It’s a bigger challenge to find them in detailed descriptions of Temple sacrifices. But she manages to talk about parenting, looking at things with “a good eye” and explains the juxtaposition of the dedication of the Mishkan and kashrus (parshat Shemini) with her inimitable style.

Finally, I visited with a new bride and groom. The groom is a friend/colleague of my husband, and it turns out that his wife is a film maker. The Second Front, released in 2002, is a documentary about Jewish partisans during World War II. Ed Asner narrates, and archival footage, recent explorations of Belarus and Vilna, and interviews with many partisans combine for wide perspective on partisan activities. While we tend to romanticize many of these heroes (think Daniel Craig in Defiance), the footage and first-person accounts show a precarious existence and the constant threat of death and starvation. The film also emphasized the interaction between the partisans, the Communists and the Russian army.

Deborah Freeman’s mother and uncle were involved in the partisan movement, and the story of their ghetto, Marcinkantze, was included in Yuri Suhl's book They Fought Back. In fact, her uncle, Beryl Novick, was one of the men who tried to ambush the German soldier who was rounding up the Jews. She made over ten trips to Lithuania and Belarus, discovering her family history and making friends along the way. Ms. Freeman also noted that in many of the villages that actively resisted the Nazis, there were yeshivot. If you are interested in obtaining a copy of the film, you can contact her.

In a related note, I am trying to read The Hare with Amber Eyes for a book discussion that will be taking place at the Bet Shemesh library. In it, the author describes a Buddhist funeral where the custom, after cremation, is to pick out the bone fragments with special chopsticks and give the deceased a kaimyo, a precept name. This name supposedly prevents the return of the deceased if his name is called. I’m also reading the latest Jodi Piccoult novel, The Storyteller. (When I read a lot of her books in succession, I met her at a Barnes & Noble book signing.)There is a character in her book who is a funeral director, who must arrange a funeral ceremony for a Japanese Buddhist – the same details of the special chopsticks and the naming ceremony.
Still reading The Hare with Amber Eyes, I learned a new word, amanuensis, which means “one employed to write from dictation or to copy manuscript.” (Thank you, Merriam-Webster.) The word also makes an appearance in yet another book I am reading: Future Tense by Chief Rabbi Lord Jonathan Sacks.

I feel like I am studying for the SAT’s. More vocabulary words from “Hare”:
mahout – someone who leads an elephant; vitrine – a glass fronted cabinet for bibelots (known to many as tzochkes); flaneurial – another blogger was also perplexed by this one. It seems to be derived from the French, flaner, which means to stroll or idle. Apparently de Waal’s ancestor was a man about town, who did a lot of strolling and idling while his bibelots sat in the vitrine; vertiginous – causing vertigo by being extremely high or steep; apogee - the point in the orbit of an object (as a satellite) orbiting the earth that is at the greatest distance from the center of the earth; meretricious - apparently attractive but having in reality no value or integrity; Empyrean - the highest heaven, supposed by the ancients to contain the pure element of fire (used in a phrase about Proust – “drinking in Charles’ empyrean conversation” – a little pretentious, no?; bagatelle - billiards-derived indoor table game; venal - Showing or motivated by susceptibility to bribery; screed – a ranting piece of writing; risible – such as to provoke laughter; heterodox - contrary to or different from an acknowledged standard, a traditional form, or an established religion; scumbled – modified (a painting or color) by applying a very thin coat of opaque paint to give a softer or duller effect; parvenu – one that has recently or suddenly risen to an unaccustomed position of wealth or power and has not yet gained the prestige, dignity, or manner associated with it; uritarian – Of, relating to, or having the characteristics of a mythical place of high, typically comic-opera romance; putto - is a figure in a work of art depicted as a chubby male child, usually nude and sometimes winged; fiacre - a small four-wheeled carriage for public hire; grandiloquent - pompous or extravagant in language, style, or manner, esp. in a way that is intended to impress; feuilleton - The part of a European newspaper devoted to light fiction, reviews, and articles of general entertainment; consanguinity - relationship by blood or by a common ancestor; en fête - being in festal dress: making a holiday showing.

I have to stop so often to consult the dictionary that I hope I finish the book in time.
More joys of living in Israel:

Visiting the Kotel on Passover 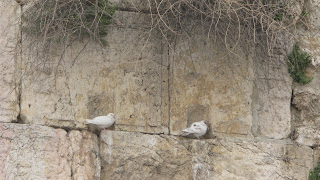 Visiting Ashkelon on a beautiful day 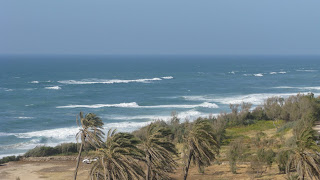 Pomegranate tree in my yard 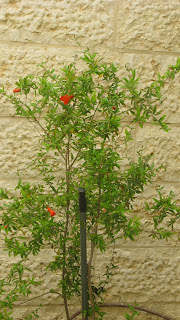