I attended the Jersualem International Book Fair at Binyanei Hauma, the International Convention Center. As I love a good book fair, I was very much looking forward. There was very little swag to be had and there were no ARC's, etc. - only books for sale. In fact, I went to the booth for books from India and found one I really liked, but I will probably have to order it online if I want a copy.

First stop: a duchan (Hebrew for booth or market stall) with Israeli author Mirik Snir. She has a new book about the seven days of creation that is imaginative and gorgeous, also probably not for general circulation in the library.


Next stop was an event at The Literary Cafe. The "stage" was set up like someone's living room, and the "audience" sat around tables on armchairs, so the could sip their coffee while listening to the discussion between Dr. Chaim Peri, former director of the Yemin Orde Youth Village and Judie Oron, author of the 2010 Sydney Taylor Notable Book for Teens, The Cry of the Giraffe. The book has been translated into Hebrew, and it is getting a lot of attention, as people feel it is time to hear the amazing stories of the Ethiopians' arduous journeys to Israel.

I met a friend and walked around the fair. There were exhibitors from Russia, Spain, Hungary, Italy, Poland, Angola and France. One section of the display had beautiful illuminated books created by modern Israeli artists. Most of the events were in Hebrew, and as much as I complained about sitting in Ulpan for five months, I understood what was going on. I sat down for the end of a discussion with Ronit Matalon and Ariel Hirschfield about their novel, Undue Influence. Through letters, it tells the love story of Lori and Natanel. Next on the schedule was "Between Reality and Redemption," which was supposed to be in English. An Israeli translator spoke with a Norweigian author. She began speaking Hebrew, and he read from his book, in Norweigian. She spoke a very broken English, and he contradicted what she said. If she said, "the opening line is very simple;" he said, "no, it's very complex." After about fifteen minutes of this, I got a headache trying to figure out what they were talking about, so it was on to the next session.

I thought I would enjoy the seminar entitled "Literary Criticism.com," and I was right. This was billed as an open discussion between bloggers about cultural criticism on the web. The participants:


Boaz Cohen - the only Israeli on the panel, who blogs in Hebrew. I could not figure out whether his blog is entitled "London Calling" or "London Culling" because the word is transliterated into Hebrew, but either way works for me. 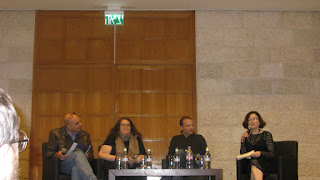 Again the room was arranged so the discussion participants werre sitting around talking while the audience members enjoyed the discussion. At times I felt the group was "too cool for me," but not in a bad way. They are all "in the know" and on the cutting edge of books and culture, kind of how I wish I could be. There were some very interesting observations and points made: don't blog about something unless you are passionate about it; if you are fooling around on the computer all day, it appears you are working and being productive, while if you sit and read a book, it appears you are goofing off, while quite the opposite could be true.

One of the most pleasant surprises of the afternoon was hearing Naomi Alderman. Her literary fiction ponders the meaning of life (pretty heavy), but in person she was quirky, funny and very good at creating metaphors (that's why I love her books!).

So all of this led up to the highlight of the day, a panel with Chief Rabbi Lord Jonathan Sacks, Rabbi Binyamin Lau and Professor Moshe Halbertal. I had to line up an hour early and the hall was completely packed and buzzing with excitement. The topic: "The Leader, the Rabbi and the Professor: Varieties of Jewish Leadership." The evening was a tribute to the Rabbi and a prelude to the release of a new book: Radical Responsibility: Celebrating the Thought of Chief Rabbi Lord Jonathan Sacks. The book "brings together thirteen luminaries of Jewish and Western thought to explore the intellectual legacy of Chief Rabbi Lord Jonathan Sacks. Centered on the fundamental themes of his work - ethics, justice, religion, and leadership - this collection advances Rabbi Sacks's lifelong quest to bridge Torah and secular wisdom, highlighting the relevance of the Jewish tradition to the challenges of the twenty-first century." Thank you, Yehudit Singer for the review copy. I can hardly wait to read it. My only problem will be creating the bibliographic information, as the book is published by the London School of Jewish Studies, The Michael Scharf Publication Trust of YU Press, and Maggid Books, an imprint of Koren Publishers. 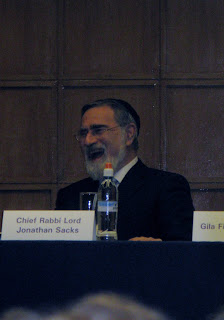 Rabbi Lau spoke mostly in Hebrew, and Professor Halbertal discussed a story from the Gemara, and then Rabbi Sacks spoke. He began in Hebrew, talking about the power of ideas, but then switched: "And now I will speak in English so I can understand what I'm saying." With his trademark combination of scholarship, charm and humor, he discussed the need for Jews to participate in the world. He terms it as the relationship between Torah and hochma (wisdom). One excellent point Rabbi Sacks brought out: with material goods, like food or money, the more you share the less you have. But with spiritual "goods," like love or caring, the more you share, the more you have.

After this incredible inspiring and thoughtful panel came the antithesis: the bus ride home. I had to stand most of the way, and my fellow city inhabitants (you know you who are because they write about you in The New York Times) made the trip that much more unenjoyable.