Adar and the Future of Happiness

It's that time of the year:

When the month of Adar arrives, we should increase our happiness [joy] (Talmud, Taanis 29a).

So this month, we look at some aspects of happiness in our quest to increase it.

We learn so many things when we read -- more than the contents of a book. As Anna Quindlen said, "In books I have traveled, not only to other worlds, but into my own.” In reading about the future of happiness, I took some side trips into copyright law, positive psychology, genetic engineering and technology.

First, an interesting note on copyright law. Book titles cannot be copyrighted. Series titles can have a trademark, but book titles cannot. Personally, I would try for a unique title so that my book would not be confused with anyone else's. But it is entirely possible for different people to think up the same title, though they be separated by borders, language or culture. I know of one case where the book first appeared as a weekly serial in Mishpacha Magazine -- Gila Arnold's Learning Curve. When the time came to publish, another book had already been released with the title. The publisher changed the title slightly of Gila's to It's a Learning Curve (Menucha 2018), so that people could differentiate between the two.

The first time "The Future of Happiness" appears is in an essay by Mihaly Csikszentmihalyi (bonus points for pronunciation) that first appeared in the collection The Next Fifty Years: Science in the First Half of the Twenty-first Century (Phoenix, 2003). Csikszentmihalyi is a Hungarian American psychologist best known for his book Flow (Harper and Row, 1990), where he explains his theory: people are happiest when they are in a state of flow—a state of concentration or complete absorption with the activity at hand and the situation. It is a state in which people are so involved in an activity that nothing else seems to matter.

In this article, he talks about controlling the genetic makeup of human beings, and what traits and characteristics they could want included in their children's genetic makeup. Csikszentmihalyi asserts that "it is most likely that the most intense selective pressure will be for producing happy children...they understand that while every other good is a means to an end, happiness is THE good in itself: it is what we hope to achieve through education, money, beauty, and intelligence." Csikszentmihalyi did a study and among the things he learned was that "people who are engaged in challenging activities with clear goals tend to be happier than those who lead relaxing, pleasurable lives. The less one works just for oneself, the larger the scope of one's relationships and commitments, the happier a person is likely to be." He discusses how the individual's measure of his own happiness is a valid assessment, and how although happiness can be subjective, there are definitely objective standards or definitions. Will scientists use genetic engineering to "program" people to be happy? The question is still being debated.

Amy Blankson's 2017 book also outlines The Future of Happiness (BenBella Books). Many people are concerned that we are so technology dependent, or addicted, based on your perspective. How can you utilize technology without letting it take over every aspect of your life. "By keeping happiness, meaning, and joy as the true North, Blankson provides a much clearer calculus for which technology to use, where to use it, and when to find safeguards against it."

After addressing "The Three Burning Questions of the Digital Era:"
she discusses "Five Modern Strategies for Balancing Productivity and Well-Being in the Digital Era:"
Holding the hardcover book, I realized that many of the people who should be reading it probably don't deal with such low tech and would have to get an e-book or an app for their device. No worries, Blankson suggests plenty of apps to put you on the road to happiness, and the book is a quick and interesting read.

The latest title comes from Mosaica Press: The Future of Happiness (2019), which invites the reader to "discover how to bring happiness to our homes -- and ourselves."  It is authored by Rebbetzin Faige Twerski. It is obvious why she attracts such a cult of personality. She is warm and wise. She speaks of the glory of Hassidic dynasties and of making one's relationship with her husband a priority. 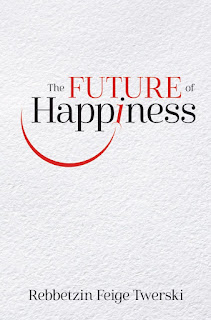 This is the latest collection of articles the Rebbetzin wrote for her weekly column in Ami Magazine. She says there are three primary relationships that bring us happiness: between me and the Almighty; between me and my soul; and between me and others. In this sense, her life experience supports Csikszentmihalyi scientific findings that a person with a larger scope of relationships and commitments will be happier. Rebbetzin Twerski asserts that "the future of happiness, as I see it, will be a world stripped of the many illusions that divide us and distance us from one another. It will be a world where we can drop the many masks we wear and be real people, free of the barriers, agendas, and aimless pursuits that separate us and deprive us of the recognition that we are truly one." Her previous published pieces are organized under several headings, including "Easy versus Happy," "Happiness versus Control," and "Positive Attitude." The reader will enjoy anecdotes about people whom the Rebbetzin met or counseled, as well as stories about her family and friends. Extremely Torah-based with lots of quotes from Psalms and famous rabbis, Rebbetzin Twerski's faith and tradition are obvious, but the distillation of these qualities into common sense and practicality for the common reader are quite impressive. Although not a big fan of collections of advice columns, these are some gems: "We, who are the bearers of a Divine neshamah (soul) and given the power of bechirah (free choice), the ability to will our lives, are charged to rise above the past and move confidently to the future, to claim our full, holy potential and personal destiny. Guilty feelings don't lead to happiness. By accepting accountability for our lives, and mistakes, we lay the foundations of true happiness."

I met this Real Cat of Israel on the beautiful yishuv of Tekoa, hometown of the biblical prophet Amos, who prophesied about the future of happiness when "I will return the captivity of My people Israel, and they will rebuild desolate cities and settle them; they will plant vineyards and drink their wine; they will cultivate gardens and eat their fruits. I will plant them upon their land and they will never again be uprooted from their land that I have given them, said the Lord, your God" (Amos 9:14-15). 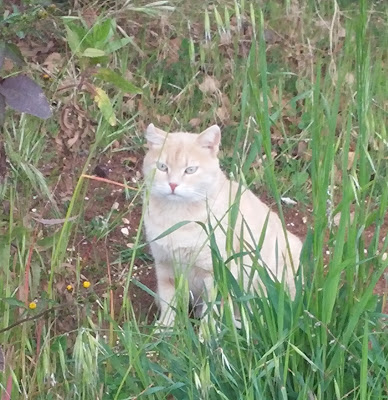