Because this year is a leap year on the Jewish calendar, Passover is relatively late this year, beginning on Friday night, April 19th. As with almost all Jewish observances, there are customary foods and family favorites.

Haroset is that mixture of fruit and nuts on the Seder plate in which we dip the bitter herbs.  In Haroset: A Taste of Jewish History (The Toby Press, 2019), Dr. Susan Weingarten "attempts to solve the riddle of the origins of haroset -- when and why it appeared, what it was made of and how it changed over the generations." Dr. Weingarten is an archaeologist and historian and has published many scholarly papers about the history of food. Full disclosure: what I thought would be an academic discourse (boring) is a fascinating exploration of both Jewish sources and cultural influences. As Weingarten explains in the introduction:


Haroset has always been something of a mystery. It was not one of the three original symbolic foods eaten at the first Passover in Egypt. It first appears in the Mishna, but with no explanation of why, and with few details of what it was made of or what it tasted like. The [Babylonian and Jerusalem] Talmuds tell us that haroset was said to resemble the mud or clay for the bricks made by the Children of Israel as slaves in Egypt, so it was clearly connected to the story of the redemption from an early stage, but we do not know when it arrived at the Seder. It seems to have been introduced to counteract the bitter herbs, which have been part of the Passover meal since the time of the Exodus.

I learned that many ancient cultures using dipping sauces to offset the tastes of other foods. Ashkenazi Jews pretty much use the same basic recipe -- apples, nuts, wine, cinnamon, and all the ingredients have deep symbolic meaning. Sephardic Jews enjoy a variety of recipes, varying from community to community and depending on the fruits available in the spring. Some groups even "add a small amount of clay or scraped brick" into the mixture. History also influenced the development of haroset, as red wine used to be added at the Seder table, but the practice was discontinued in Europe because of blood libels. Communities often made a huge batch that was distributed to all the families.

Most recipes are not exact; the important thing is that the consistency should be thick, like mortar. Sephardim often cook the mixture, and grinding the mixture is an important part of the process for all cultures.

Want to add an interesting taste to your Seder? Try "Zoya Leviva's Haroset from Uzbekistan:"

©The Toby Press and Dr. Susan Weingarten, 2019. Used with permission.

Paula Shoyer is known as "the Kosher Baker," and she is an expert on the history of Jewish cookbooks. She is also the author of four cookbooks: The Kosher Baker (Brandeis University Press, 2010), and three from Sterling Epicure: The Holiday Kosher Baker (2013), The New Passover Menu (2015), and The Healthy Jewish Kitchen (2017). For Passover, she is sharing some recipes for the holiday that those who eat "keto"will also enjoy.

For those who have been living under rocks, the keto (ketogenic) diet is protein rich, high fat, low carbohydrate plan of eating. The diet has been suggested for children with epilepsy, those with neurological disorders, those on the spectrum, and Parkinson's Disease patients. Those who work out frequently have also embraced the keto diet. Since so many carbohydrates are either chametz or kitniyot (grains, beans, and soy that Ashkenazi Jews do not eat on Passover), you can literally have your cake and eat it, too, as the baking ingredients for her desserts include coconut oil, almond flour, and quinoa.

Place the quinoa and water into a small saucepan and bring it to a boil over medium heat. Reduce the heat to low, cover the saucepan, and cook the quinoa for 15 to 18 minutes, or until all the liquid has been absorbed. Let sit for 5 minutes off the stovetop. The quinoa may be made 2 days in advance and stored in the fridge.

Preheat the oven to 350°F. Use cooking spray or oil to grease a 12-cup Bundt pan. Sprinkle 1 to 2 tablespoons coconut flour, or more if needed, over the entire greased pan and then shake the pan all around to cover and then tap out the excess.
Place the quinoa in the bowl of a food processor. Add the lemon zest and juice, eggs, vanilla, oil, sugar, almond flour, coconut flour, baking powder, baking soda and salt and process until the mixture is very smooth, about 2 minutes.
Pour the batter into the prepared Bundt pan and bake it for 1 hour, or longer, until a skewer inserted into the cake comes out clean.


Let the cake cool for 30 minutes and then remove it gently from the pan onto a wire cooling rack.
Recipe by Paula Shoyer
www.thekosherbaker.com
used with permission

As a responsible reviewer, I tried this recipe, and...
I am not a big fan of coconut, which came through more than the lemon for me. But, the cake is super easy to make, there are no weird ingredients that are not available during Passover, it does not require tons of eggs that have to be separated, and it was gone in less than 24 hours, so somebody enjoyed it very much.  Further proof is that my cake looks similar to the promotional picture of Paula's. 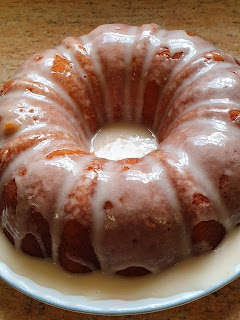 For more about Paula Shoyer, super colleague Heidi Rabinowitz spoke to her at the Limmud Conference in Boca Raton, Florida in December, 2018, and you can hear their conversation at Heidi's podcast - The Book of Life. 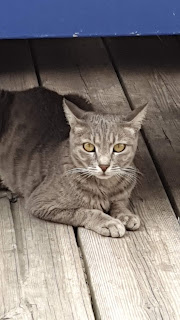 The Real Cats of Israel are enjoying the spring weather:
Chag Kasher V'Sameach!
A Happy and Kosher Passover!
Happy Reading!